Our Family Caring For Yours

Therapy Dogs Can Help With Grief 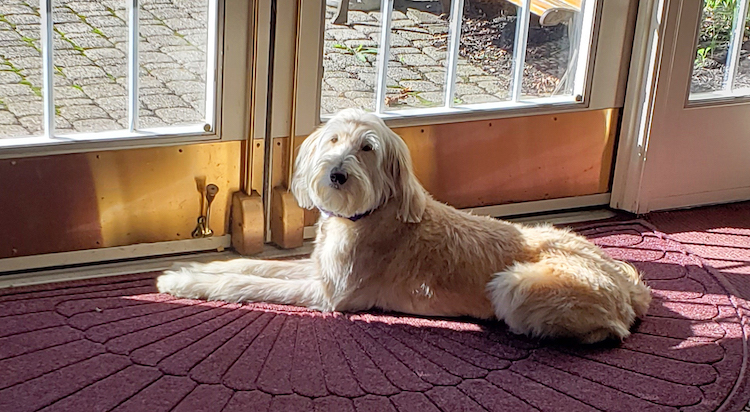 It was a sunny June day in 2015. Our morning staff meeting at the funeral home was in for a surprise. Owner, Michael Perotto showed up with a jubilant, blonde fluffball of fur at his side. He announced that his new puppy would be a part of our team.

We all basked in the glow of puppydom with happy licks and wiggly wags. We had no idea the impact he would have on the families we serve, or on us personally. This Golden Doodle named “Rocky” not only became a team member but an important part of our family here at Bartolomeo & Perotto.

Rocky is now a fully trained, certified therapy dog. He still has moments of “teenage angst,” preferring to chase leaves outside than walk beside you like a champion canine. But that’s what is so endearing about our friend Rocky, he emits a sense of “realness.”  That realness shows in his natural ability to seek out and give comfort to those who need it.

The beauty of a dog’s perspective is that they know no boundaries. They give what is needed unconditionally. Many of us who have pets understand. We witness this gift with Rocky daily. His ability to take away intense grief, if only for a short time, gives hope that we will get through it.

How did Mike & Dave Perotto come upon this concept for the funeral home?

They first learned about grief therapy dogs at a funeral industry conference. A Funeral Director from Krause Funeral Homes in Milwaukee, Wisconsin told a story about their dog, “Oliver.”

Unfortunately, Oliver had passed away. The Krause family and the funeral home staff were overwhelmed with grief. But what surprised them was the reaction of the local community.

Word got around of Oliver’s death and calls flooded the funeral home. Oliver had connected with so many of these people at a crucial time. The funeral home realized they needed to let the community honor and grieve.

They decided to hold a funeral service for this creature that had touched so many. They were overwhelmed at the showing of people. Over 200 people attended the service for Oliver.

This is one example of how animals deeply touch our lives.

Dogs and other pets have been introduced into nursing homes, hospice centers, and other service organizations with incredible results. On more than one account, a person in a catatonic state has virtually “come to life” through interaction with an animal.

Friendly contact creates smiles, happiness, and positive socialization. Similarly, this interaction also brings comfort during times of distress. These phenomena have been observed over and over again. If you think about it, you’ve probably seen it too!

Oliver’s powerful story made it clear